I was wondering where I was for a whole month.  I found me in my garden and found my dragon there, too. First of all, this is the daffodil. 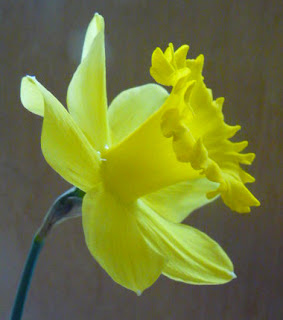 There were two of them blooming in my Oregon garden this morning ... in March, already. I snapped this picture with my trusty camera and didn't have to do any "magic" to it ...well, its aroma is totally magical.
I've just finished editing the second Education Projects book for our Brazilian dimensional embroidery group, BDEIG, Inc. It's going to be a good one - lots and lots of projects to stitch. More on that later.
Here's the little dragon: 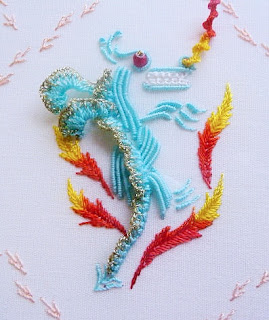 He's one of the Brazilian dimensional embroidery "Cutie Pies" from the back cover of my book, Take A Stitch. 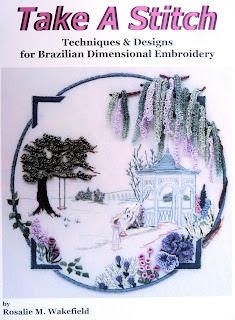 Fabric print available, instructions are in the book -- available at my website, www.Millefiori-BE.com. A lot of people already have my book; if you'd like the print, send me an email and let me know if you would like a cream or a white print. I'll let you know the cost plus postage and you can do the PayPal or check thing to get it on its way to you. 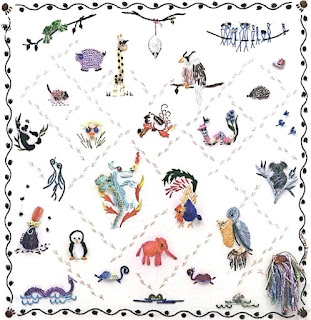 OK, back to the little dragon. Here are a couple of detail pictures to entertain you. (He's harmless unless you stick yourself with your needle) Here he is napping on his nose (also known as a "detail photo")
﻿
﻿
﻿ 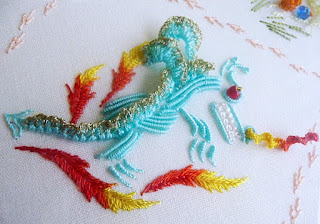 And here he rolled over on his back: 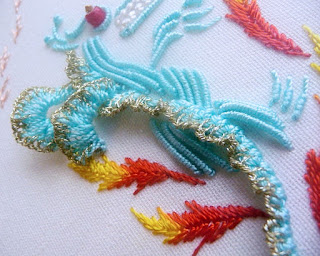 Doesn't look very tough now, does he??
Oh, wait, he just said "grrr" (or whatever it is that dragons say ...if they say anything): 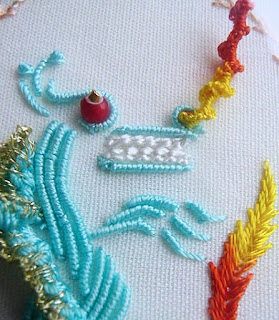 Looks like he was just at the dentist's, doesn't it?  Grrr.
There were lots of other Cutie Pies. This next one I called a Barnyard Dragon: 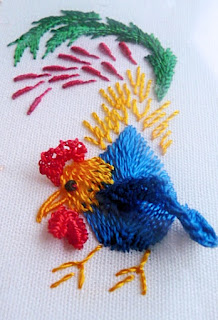 ...and I think those dimensional stitches we do come in pretty handy.  If you scroll back up, you'll see that I used various animal tracks to separate each of the Cutie Pies (even the edge border).
And then I stitched this little pelican, another of the Cutie Pies. He's just been out fishing - nice he has a place to store his fish. 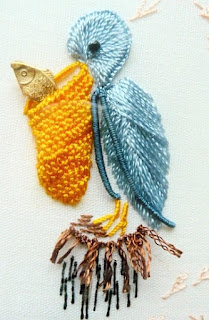 So now I'll go back to work. By the way, I've been posting on Facebook. I have a Millefiori page there, but there are also a couple of really interesting Brazilian embroidery groups you might like to visit.
This is the OTHER daffodil I saw this morning. It's the start of my daily circuit around my garden with my camera. I saw a camellia bud the other day, and the snowbells are blooming everywhere (they think they are weeds, but I don't -- I like them all).  Daffodil ahead: 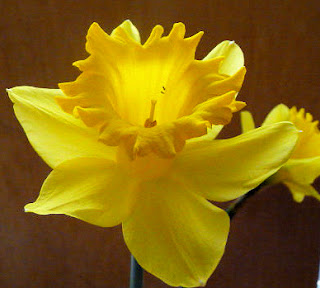